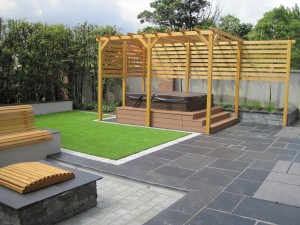 There are a number of features which are becoming quite popular to integrate into a Garden Design.   Built in seating is regularly requested,  fire pits have become more popular in recent years and now occasionally a Jacuzzi!   Built in seating and a fire pit often go hand in hand and are now quite regularly asked for.   The fire can be created using an outdoor gas fire kit or it can be made to burn natural materials like wood.   Creating built-in seating around the fire pit makes this space a very sociable place for outdoor entertainment and adds warmth to our cool summers evenings.     An attractive removable top created to cover the fire pit when

not in use also finishes the design and is well worth the extra investment.

It is also becoming quite popular to have a Jacuzzi in your garden, even in this country, where the weather might not always be at its best.    Integrating a Jacuzzi into a garden design has to be considered carefully as they are much larger in reality than it appears at first and can dominate a small garden.   Visibility from the neighbours overlooking the garden can also be an issue which also needs to be addressed.     The jacuzzi needs to be on a firm surface and access to and from the jacuzzi needs to be integrated into the garden design.

The planting includes mature espalier beech hedging on each side in the raised borders to increase the privacy together with a selection of shrubs and perennials to soften the design when mature creating a wonderful garden for relaxation and entertaining!

This website uses cookies to improve your experience while you navigate through the website. Out of these, the cookies that are categorized as necessary are stored on your browser as they are essential for the working of basic functionalities of the website. We also use third-party cookies that help us analyze and understand how you use this website. These cookies will be stored in your browser only with your consent. You also have the option to opt-out of these cookies. But opting out of some of these cookies may affect your browsing experience.
Necessary Always Enabled

Any cookies that may not be particularly necessary for the website to function and is used specifically to collect user personal data via analytics, ads, other embedded contents are termed as non-necessary cookies. It is mandatory to procure user consent prior to running these cookies on your website.