Formal Parterre for a Front Garden

Gardening Blog, Updated newsComments Off on Formal Parterre for a Front Garden 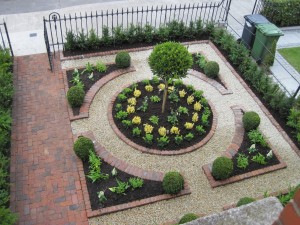 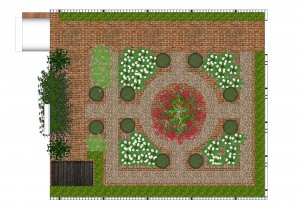 A lot of people would think that formal parterre gardens are a thing of the past or something for only very large gardens on country estates.   Think again, as you can make a lovely statement in any garden front or back garden if you wish with a formal parterre.     In this case we were asked to re design the front garden of a period style home in south Dublin and totally transformed the garden into a formal parterre which beautifully compliments the house.    We used soft red bricks in a basket weave pattern to create a straight path to the front door and then continued the brick around the parterre to create a formal arrangement of borders surrounded by paths of gravel. 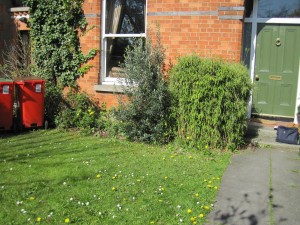 A central feature standard laurel was used as a gorgeous focal point in the centre of the parterre under planting it with two circles of low growing hedges in varying colours and textures which will eventually grow and be maintained at two different heights.    Box balls were used on the corners of the parterre for added formality and structure, off setting the more informal plantings of mixed perennials in the other borders to soften the effect.    A range of plants and bulbs were used to give colour from spring to autumn, but we used mostly only white flowering plants with a touch of purple.

Whilst planting this garden we received an unexpected number of queries, compliments and questions from passer bys and neighbours as they were all looking forward to see how it would turn out.    I can’t wait to see it in flower next year and I am sure it will not disappoint the neighbourhood!

This website uses cookies to improve your experience while you navigate through the website. Out of these, the cookies that are categorized as necessary are stored on your browser as they are essential for the working of basic functionalities of the website. We also use third-party cookies that help us analyze and understand how you use this website. These cookies will be stored in your browser only with your consent. You also have the option to opt-out of these cookies. But opting out of some of these cookies may affect your browsing experience.
Necessary Always Enabled

Any cookies that may not be particularly necessary for the website to function and is used specifically to collect user personal data via analytics, ads, other embedded contents are termed as non-necessary cookies. It is mandatory to procure user consent prior to running these cookies on your website.